As I look back on my history of painting vintage furniture it obvious I just can’t get enough of green painted furniture.

These next nine pieces shown below all painted in various shades of green shown some of are my own projects. They were all bought, restored, painted and waxed by me and all were done the first year I was painting and selling my chalk painted pieces. 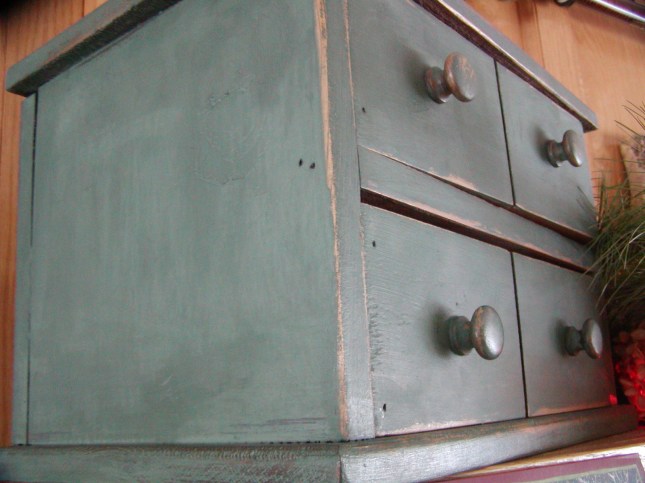 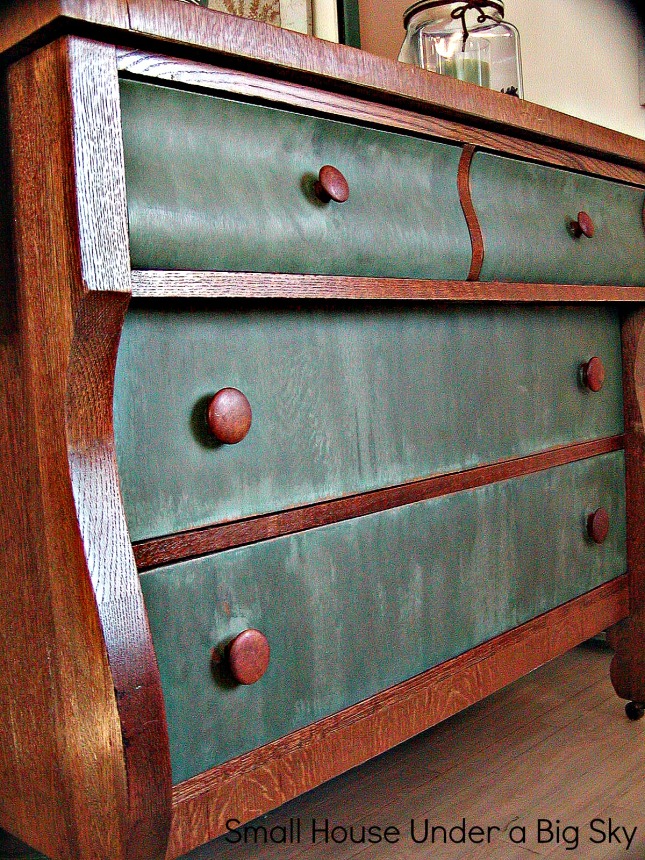 Then this week I read on Houzz that forest green is a “trending” color right now. http://www.houzz.com/ideabooks/80942265/list/shop-houzz-3-trending-palettes-for-forest-green

These photographs below are from my Pinterest file titled Green Furniture. I love, love, love these vintage pieces shown below… 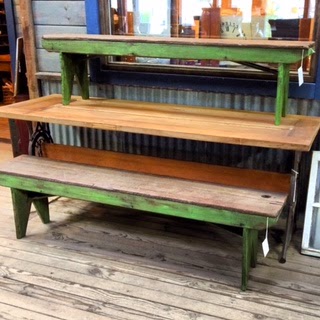 At the Small House green is the new black!

By now you have figured out I REALLY have a thing for vintage furniture.

And today, I finished another vintage piece, this time a magazine holder. Today I waxed the green on green vintage magazine holder I’ve been slowly working on.

It’s been several years now since I began this piece but it for some reason it got put on the back burner. This piece sat in my studio for a couple of years half-way painted but never finished. No real reason… just a lack of time, energy or motivation I guess.

The magazine holder, “after.”

I’m thinking of decorating the front with something special, probably using a stencil and gray or black paint but I’m not sure exactly what stencil yet.

Not this exact stencil but something simple and similar in feeling to this.

When I found myself missing the painting gig this winter, I began to make time to work on a few unfinished projects still in my studio. And once again green chalk paint has really become my thing. 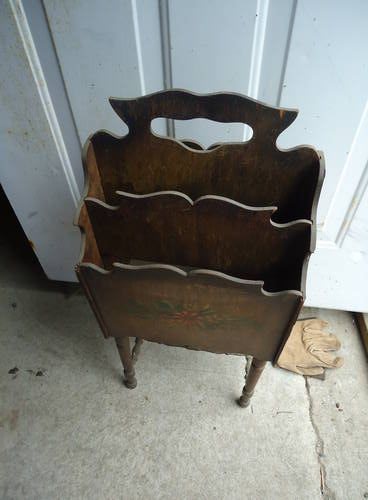 I forgot to take a “before” photo of the magazine rack but this one is similar.

When I bought this piece it was painted a shiny red and black and quite frankly, it was ugly! But I’ve painted enough ugly pieces over the year that I knew that with some paint and TLC it could be made pretty again. Although my paint stash is running low and my choice of chalk color paint is quite limited, I did have enough Michigan Pine green left to complete this project. 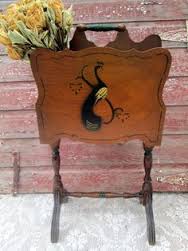 Another magazine holder from a similar era found on Pinterest.

It took multiple coats of green chalk paint to cover up that bright red glossy paint, but it worked. I really adore the dark green with light green accents and the contrast this had made. It is really a pretty combination in my opinion. I especially I LOVE the turned legs on this piece that reminds me of the spindles on the Jenny Lind bed I bought for my son’s when they were babies.

Another view of the contrast between the greens.

This piece also sent also me on a hunt for similar magazine holders on Pinterest and I found a lot of them; both tall and squat, on legs and with no legs, painted, decopaged and decorated and more. I have saved over 100 versions of the painted magazine rack on my Pinterest board titled, Vintage Magazine Holders. Feel free to visit that!

In fact, I noticed today that I have four different boards, with the title Vintage in it!

Although this piece is technically a magazine holder, I imagine it could can be used to contain numerous other items like maybe holding towels, linens, platters, a laptop and more. What else do you think this magazine holder might hold?

I find there is gracefulness to these older pieces that makes them lovely to look at as well as still functional.

This copied piece came up in my news feed today (see below.) The main theme of the conversation was about why the middle class still matters. This set me to thinking. This also set me to writing this piece. “Why I Choose to Leave the Middle Class” and sharing this with Frontline.