One of my favorite chicken breeds is the Rhode Island Red. It’s the chicken of choice for those who want consistent, quality egg-layers of large brown eggs. While I don’t eat my chicken friends; they make good fryers for those who do.

Bud Wood, who owns a hatchery and says Rhode Island Reds are one of the earliest breeds developed in the United States and are among his best sellers because of their production qualities. This makes them a Heritage breed and is a quality that also attracted me to them.

‘They’re a fairly gentle breed and they lay a nice big, dark brown egg,” Wood says. “They’re a hardy breed, and easy to raise. Rhode Island Red is probably the beginning genetics of all of the commercial brown egg layers today.”

At peak production, these hens are egg-laying machines. Just one hen will give you five to six eggs a week. I’m told they do not often go broody which after my Cochins who are broody for weeks at a time, this will be a blessing!

The Reds have a larger body type than other breeds. Wood recommends feeding them a commercial layer mix, which gives them all the nutrition they need. You can also provide a place to forage. It cuts their consumption of commercial feed way down, maybe even in half. Grubbing around the yard for plants and bugs makes their yolks a brighter yellow color.

I picked up my Rhodies from Town Line hatchery in Zeeland, MI on the day they were born. By afternoon they were in their brooder eating, drinking and doing well. I choose sexed birds because I wanted all hens.

They were not even a week old and they were already modeling for me and standing still so I could take their photo as seen by the photographs I am sharing in this blog today. By the fourth week I was carrying them outside on sunny days where they spent several house in a temporary pen running, jumping, scratching, pecking and eating whatever they could catch. By eight weeks they were free ranging all day long and sleeping in the coop overnight. They are very fast developers. 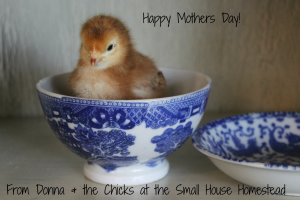 While the Reds are roaming, in order to keep them safe be sure they have a place to go for protection. 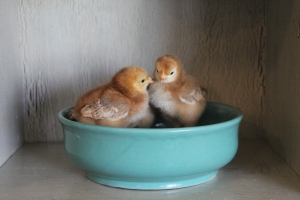 “They need some place to get in and out of the weather,” Wood says. “A tight building is preferable so that there isn’t a draft in the winter. And some way that either the building’s heated, or the water needs to be heated, so they always have fresh, clean, unfrozen water. They would love to go out and forage if you have a way of protecting them from critters during the day. They’ll naturally come in and roost at night.” 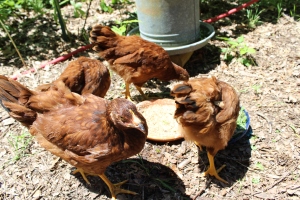 Above photograph they are one week old and today at 10 weeks old.

If your goal is to raise Rhode Island Reds as fryers, Wood says it takes a chick about 14 weeks to reach six pounds.

Chicks will cost about $1.00 for males and $2.25 for females. A straight run or non-sexed batch of chicks is the most economical.

If  you are looking for great chickens, give the Rhode Island Red breed a try.

One thought on “Why I Love My Rhode Island Reds”